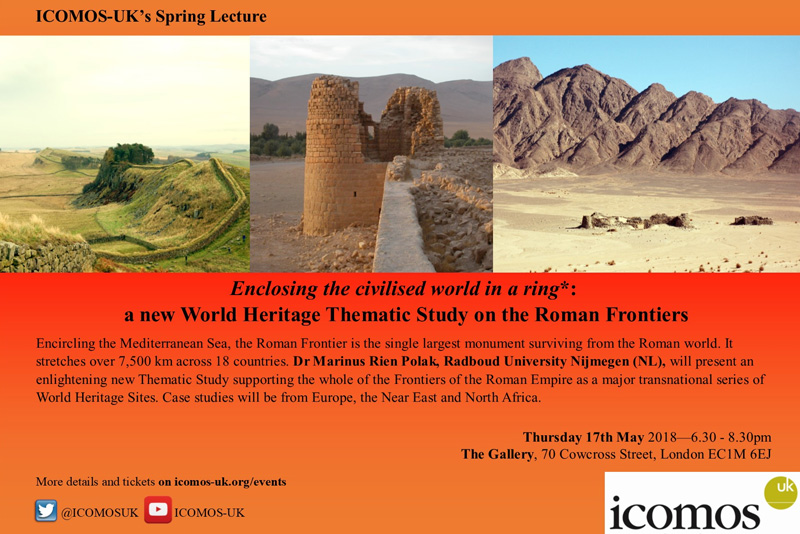 10th of May: Repairing the Kinsol Trestle: the timber train viaduct on Vancouver Island

17th of May: Enclosing the civilised world in a ring: a new World Heritage Thematic Study on the Roman Frontiers.

About Dr Polak:
Dr Marinus (Rien) Polak studied Roman Archaeology at Leiden University (NL) and has a DPhil from Radboud University Nijmegen (NL). He has been working on the frontiers of the Roman Empire for over thirty years, in the fields of academic research and archaeological heritage management. He is working as a lecturer in Roman Archaeology at Radboud University, carrying on the established research tradition of that department in Roman military matters.
Over the last few years he has been involved as an academic advisor in preparing the proposed nomination of the frontier of the Roman province of Lower Germany, stretching from Bonn (D) to Katwijk (NL) on the North Sea coast, for the World Heritage List. He is one of the authors of the Thematic Study ‘The Frontiers of the Roman Empire’ presented to UNESCO earlier this year.

Pictures (from left to right):
– Hadrian’s Wall to the west of the fort at Housesteads (UK) –  from Wikimedia Commons
– Corner tower of the desert fort of Khan al-Hallabat, 39km south-west of Palmyra
– The military post of Falacro in the Eastern Desert, Egypt, on the route from the Nile to Berenice on the Red Sea Coast
ICOMOS-UK thanks Michel Reddé and Markus Gschwind for granting permission for the use of their photos. The Kinsol Trestle is the largest wooden trestle in the Commonwealth and one of the highest railway trestles in the world. The trestle fell into disrepair and in December 2006 the local government took a decision to demolish the structure at a cost of $1.5m. McDonald & Lawrence Timber Frame put in a rival bid to conserve it for $1.25m which triggered a campaign leading to its remarkable rejuvenation.

ICOMOS-UK’s Wood Committee has invited Charley Brentnall over to talk about the repairs to the Kinsol Trestle, as he collaborated on a survey and strategy to repair the Howe truss spanning the ravine.

Charley is director of Carpenter Oak Ltd and will look at what has changed for the timber train viaduct on Vancouver Island.